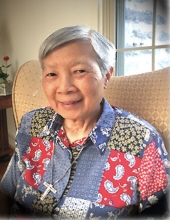 Sister Cecilia Tong, a member of the Handmaid community for more than fifty years, passed away on January 21, 2021 at Saint Joseph’s Manor in Huntingdon Valley, PA.  Born in Vietnam, Sister Cecilia’s journey to becoming a Handmaid was based on great faith, and as she once descibed, “miraculous”.
That miracle came in 1954, at a time when there were many bombings from the far north of Vietnam to her family’s village. Almost every night, carrying mats, blankets, and food, Sr. Cecilia’s family sought to escape the terror of the bombings and traveled through the dark to stay at the home of a friend who lived two hours away. A safer place, they took shelter there for many months. One evening, Sr. Cecilia and her family remained at home, intending to attend Mass and make Adoration and Reparation to the Blessed Sacrament the next day.   Soon after, they learned that the friend’s house had been bombed the night before, and that there were no survivors.  Her father described their protection as a miracle. As she recalled the experience she revealed, “I am certain today that my love for the Reparation and Adoration of Jesus began at that time.”
Years later, on her first trip sailing to the US, Sr. Cecilia met a group of young women dressed in black habits, each with a golden heart hanging from her neck.  Curiosity forced her to ask them about their Congregation, their spirituality, their apostolate – anything she could think of.  They informed her that they were members of the community of Handmaids of the Sacred Heart of Jesus, that their charism was reparation to the Sacred Heart of Jesus, and that they were dedicated to daily Adoration of Jesus in the Eucharist and education at all levels.  Instantly, though unable to explain it, she felt a connection.  She made her final vows as a Handmaid on August 15, 1975.
At the height of the Vietnamese influx to the US, Sr. Cecilia was the only Vietnamese religious in the Philadelphia archdiocese, and worked around the clock with the refugees from her country.  Described as a “dynamo” and multi-lingual (she spoke seven languages) she later taught in the East Asia Pastoral Institute, worked in formation training with Handmaid postulants, and was a contributor to Radio Veritas in the Philippines.  In recent years, she returned to the US and lived and worked at Saint Raphaela Center with the Haverford community before moving to the Wyncote community, and finally, the Manor.  A mass of Christian Burial will be held on Saturday, January 30, 2021 at 11:00 am. at Church of St. Luke the Evangelist 2316 Fairhill Ave. (at Easton Rd.) Glenside, PA 19038. Relatives and friends are invited to her viewing at the Church Saturday after 9:30AM. Interment at Holy Sepulchre Cemetery in Cheltenham, PA. In lieu of flowers donations to Handmaids of the Sacred Heart of Jesus 2025 Church Rd. Wyncote, PA 19095 would be appreciated.

Keep up to date with the happenings of the Handmaids and their ministries.