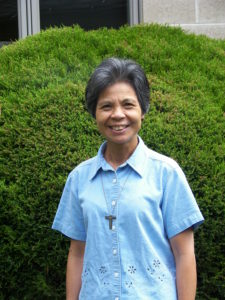 “If you sinful people know how to give good gifts to your children, how much more will your Father who is in heaven give what is good to those who ask Him! (Mt. 7:11)

How does a young Vietnamese woman hear and follow a vocation to a Congregation that is not even present in her own country?

In various ways, Sister Asunta owes her vocation to her father.  He never directed her toward a specific career, nor toward marriage or consecrated life. He taught her to think with an open mind and to recognize and to follow the truth.  A soldier in the Vietnamese-French army, her father was exposed to western culture and ideas, and incorporated the positive aspects of that culture into his own traditional Vietnamese family and values.  In the years just prior to the war the family had little money, but her father was determined to give his children an education, and to see that his daughter received a high school education, something extremely rare at that time.  Many nights were passed  as father and daughter sat at the table and talked together.  And Asunta absorbed many lessons from her father.  It was his open-mindedness and conviction of a greater truth that made the following story possible, and which lives on in Sister Asunta as a Handmaid of the Sacred Heart of Jesus.

While Sister Asunta says that she never thought about a vocation to religious life until her late teens, neither was she interested in dating.  Growing up with brothers, cousins, and young uncles, she knew that “boys were boys,” and preferred to focus on her schooling. At the same time, she made it very clear to her family that they were not to attempt to arrange a marriage for her. “I’m not going to marry until I’m 25, so don’t even ask me about it before that!”

At the age of 18 she went to visit several convents with a friend who was going to enter religious life.  The question of a vocation to consecrated life then began to surface within her.  She asked herself: “If she can do it, why can’t I?”  She began spiritual direction, but did not speak directly of a vocation for two years.

Sister Asunta had always been attracted to the Blessed Sacrament, and attended Night Adoration once a month in her own parish.  “Even though I didn’t have a theological understanding, I felt at home before the Blessed Sacrament.  I forgot all my other burdens.  Sometimes I said prayers, and sometimes I just sat in silence, gazing at the white host.”  When Sr. Asunta finally began to consider seriously a vocation to religious life, she felt strongly that adoration had to be a central aspect of the congregation she would enter.  Visiting communities, she did not feel inclined to any one in particular.  “I’m looking for something, but I don’t find it.  Maybe I’m not called” she began to think.

Her director told her that he did, in fact, know of a Congregation that held the Eucharist at the center of its prayer life and apostolate in the way in which Asunta was seeking. they were not contemplatives but they actually did Adoration daily. Yet,  it would mean that she would have to leave Vietnam.  Her conviction was strong enough, however, that she desired to meet the sisters of this congregation.  A short time later, the General  Superior of the Handmaids of the Sacred Heart of Jesus came to Vietnam to consider the possibility of founding a community there.

A meeting was arranged. The attractive young woman in her twenties spoke in a mixture of French and English to the European head of an international congregation which was founded to be actively involved with people while making time to Adore Christ daily in the Holy Eucharist. The motive of the sisters worldwide was Reparation to the Sacred Heart of Jesus.  The prospect sounded intriguing.  It seemed as if God were calling. After that conversation “all of my energies became focused on the Handmaids.  That my call might be to the Handmaids’ charism was  a deeper truth than even I could recognize at the time.”

To follow a vocation to the consecrated life means for anyone many departures:  home, family, one’s own use of money, time, etc.  To follow a Handmaid call to Reparation  for Sister Asunta meant that plus much more. She would have to leave Vietnam, her culture, her family, her language, and adapt to a  foreign culture with news ways. Going to Europe meant that she would have to recognize that she may never return to her native land. Her father, whom she deeply loved and respected, spoke to her with a directness that conveyed his conviction that this was her decision.

“My father gave me liberty and full support in the decision, but he told me to stick with whichever decision I made. He meant that I would need to beg for God´s guidance, blessings, and grace.  I knew all along the way that I had my dad’s support.”  S. Asunta would be losing much that was familiar. In the act of traveling thousands of miles she would be an a journey in which she would find  in following Jesus much more than she had imagined.