St. Raphaela Mary Quotes
Let us make others happy; this is true charity - This year I want to be the joy of the Lord! Choosing God's will fills the heart with joy and gives us peace. 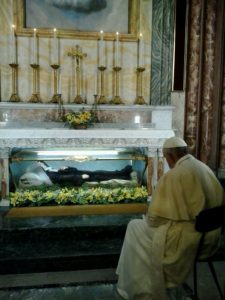 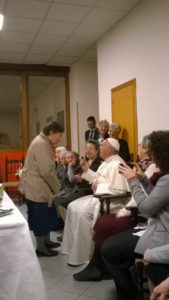 A jubilant group of Handmaids of the Sacred Heart of Jesus received an unexpected guest at the house of XX Settember in Rome on January 2. Without notice, Pope Francis surprised the sisters and indicated that his intention was prompted by a desire to pray at the shrine of St. Raphaela Mary, to whom he is said to be deeply devoted. The sisters, many from the Province of Italy, the Sisters of the Preparatory Commission, the Sisters of Torricella, and the General Curia were obviously overjoyed by the Pope’s impromptu visit, and welcomed him with deep emotion. By chance, one of the Sisters who was present for his visit is Sr. Belen Escauriaza, who is currently in Rome, along with the other Provincial Superiors. After his time spent in prayer, Pope Francis greeted the Handmaids and shared in what was described as “a simple party” the Handmaids prepared.